Fleas are not so common in humans, they are mostly seen in pets like the dogs and cats. Many people tend to think that unlike the ancient medieval times characterized by lack of hygiene and poor methods of preventing parasites, today people cannot get flea bites. Fleas do bite humans just as they would a cat or a dog. By and large, these parasites never care who they such blood from whether it is a dog or a cat or a human.

When people see the red spots on skin caused by flea bites, they tend to shift the blame to their pet friends who may carry them around in the home. While it is true that fleas inhabiting cats and dogs (warm blooded animals) may bite people, it is also true that a separate human flea exists. The human flea feeds not just only on human blood but also on animal blood. The human flea is larger in size compared to other species; it is easy to recognize it based on the size considering that animal fleas tend to be extremely tiny. 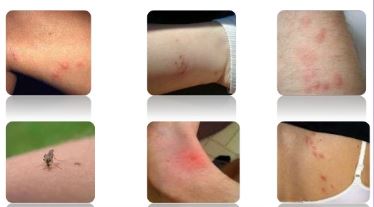 If you are a hunter, you may suffer flea bites from fleas that inhabit birds, rabbits, foxes, and other creatures found in the wood. The Western Australia Department of Health8 says that skin reactions resulting from flea bites tend to appear within minutes and this is one reason people may confuse flea bites with mosquito bites.

When fleas bite a person, they may cause a reaction that presents as flea rash. The rash often shows up in three bumps occurring together. The rash may itch and bleed, it’s mostly located on fold of a joint, especially at the knees, elbow, or ankle. It may also be located on the person’s armpit or in skin folds including those of the groin and breast areas, according to the U.S. National Library of Medicine.9

When the flea is piercing the skin of a person with its sting, it not only hurts the individual but also infuses its saliva into the site. The saliva contains hemolytic toxins. Sometimes, it is not possible to predict what kind of reaction a person will have from the toxins. In case the reactions manifest in form of a regular rash and itching, then the individual may need to use some topical treatment to clear it up.

Pets such as dogs may also be invaded by fleas and suffer dog flea bites. Sometimes, it may not be easy to identify fleas in dogs, especially in the early days of an invasion. It’s not likely to find an adult flea on the dog during the early stages of the infestation, however, there may be flea feces that are also referred to as flea dirt – they are a tell tale sign of an infestation. 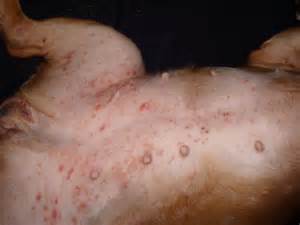 In light colored dogs, it is easy to see flea feces, however in dogs that have dark color, it become difficult to detect the flea dirt. Probably what you can do is run a fine-toothed flea comb on the fur of the pet, it will help pick up the flea dirt and any adult fleas that may be present. You may mistake flea dirt for something like specks of dirt because they look like ground pepper. You can distinguish flea dirt from actual dirt by putting it on some damp white tissue. The moist flea dirt reveals some reddish-rust color on the tissue an indication of present of pet’s blood that has been ingested by a flea. 10

When bitten by a flea, some dogs will show allergy reaction, they become extremely itchy. Even one or two fleas may induce an allergy reaction to the sensitive dogs. In situations where only a few fleas are present on the fur of the pet, it is not possible to see them, even the flea dirt isn’t seen. The intense biting, scratching, and licking by the dog because of its sensitivity to flea bites will obscure any evidence of having fleas on their fur.

A flea bite allergy is the reason you see dogs scratching and not fleas walking on the skin of the pet as many people may think. Flea saliva causes the reaction and the dog becomes itchy. The itching may occur anywhere in the body but it is experienced in areas like the groin, hind legs, and the skin on the dog’s back particularly the area between the tail and ribcage. It is important to note that not all dogs show allergy to flea saliva.

Flea bites on a dog will look like some small, red, raised dots appearing on the skin of the pet. The dots are small than those of other insects’ bites and may, at times be difficult to see through the fur of the dog. However, if your dog is allergic to flea bites, then the area of redness is mostly likely to be larger, and may therefore be easily seen. Because of the allergy reaction dogs have from flea bites, they may show symptoms such as:11,12

Flea bites in children are more common compared to adults, reason being that the immunity of children is weak. In children, fleas don’t just bite once, they do it many times as they move around the skin. A child who has had flea bites will show numerous small, red bumps occurring on the surface of skin. 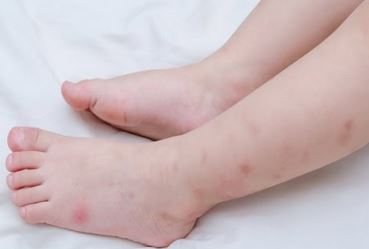 Looking at the bumps closely, you will find that there are red halo forming on every bump as well as presence of a tiny hole at the center. The bumps appear in cluster mostly on the lower parts of a child’s leg and around their waist area where clothing is tight. A child will have constant itching that last for a couple of days. The child may break open the skin when the itching is so intense thus causing bleeding to occur.13

The reason why children may have more pronounced reactions to flea bites are many and they include: