What are Bronchial Spasms?

Bronchial Spasms also referred to as bronchospasms, are the unexpected and unusual constriction in the walls of the bronchioles which make it harder for the person to breathe.

Doing simple activities daily can be greatly affected when a person suffers from bronchospasms and most people who suffer this type of problem are those who also suffer from asthma. Bronchial spasms are divided into two kinds; paradoxical and acute spasms.

Acute spasms happen after an unanticipated constriction and it causes the respiratory airways to narrow down. This kind of spasm may be threatening since it can result to the production of mucus, which might cause more damage and additional blockage in the airways making it much harder to breathe. The airways may get inflamed as well.

Paradoxical spasms take place when certain medications are used to treat bronchial spasms and turns out to have harmful side effects; instead of managing allergic reactions, it makes the condition more aggravated.

What are the Symptoms?

The symptoms that might be experienced due to bronchial spasms might depend from one person to another in cases of the severity and time span.

As the muscles constrict, common symptoms occur and these include; wheezing, coughing, difficulty in breathing, shortness of breath and tightening or heaviness of the chest. The increased ventilation of the respiratory system extremely magnifies the effects of bronchial spasms. 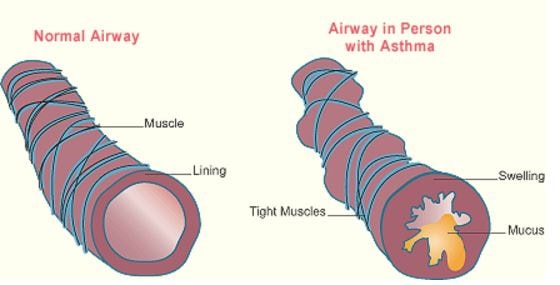 There are a number of factors that can possibly trigger bronchial spasms to occur. Triggers that usually happen include allergens such as pet hair, dust, molds or food like shellfish and nuts.

This condition may also be caused by irritants like smoke from cigarettes or in other areas that consist of smoke, chemicals, and aerosol sprays can also be another reason of developing bronchial spasms. Bronchial spasms is also said to be inherited from the family.

How is Bronchial Spasms Treated?

There are many ways to prevent or treat bronchial spasms whether it be natural methods or through medications, but it is still best recommended to consult a health practitioner before starting any treatment. Natural and herbal methods are very helpful and beneficial for a person’s health too.

These natural remedies include:

Aside from the natural remedies, an inhaler can be used as treatment for bronchial spasms in order to open the airways. Depending on the physician, the person may also be advised with cough suppressants or an expectorant to clear mucus secretions. The physician might also prescribe antibiotics in the presence of a respiratory infection.