What is Chicory Root?

Chicory is a herb with blue flowers. It is also known as cichoriumintybus. Many varieties of this herb are grown for either leaves or root value. The root of chicory has long been used as caffeine but it has other health benefits1, 2. 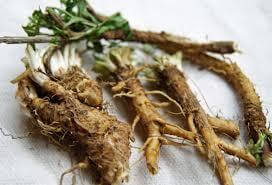 Inulin is now being sold in processed foods and functional markets as an alternative sweetener.

Chicory root has numerous health benefits such as3, 4, 5:

Our intestines have symbiotic bacteria such as bifidobacteria and lactobacillus which assist in healthy digestion. These bacteria help block pathogens such as Candida (a type of yeast species) from entering our body and cause infections. By inhibiting these pathogens, these bacteria support the immune system in fighting infections in the body.

Chicory has inulin which is a strong probiotic and soluble fiber. Inulin has the capability to lower the acidity in the body and hence it’s useful in preventing digestive problems such as indigestion and acid reflux.

According to studies, chicory roots boosts the flow of bile from the liver to the gallbladder and then to the small intestine. This helps break down fat and hence chicory roots help support digestion. Extracts from chicory roots also assist in relieving digestive discomfort caused by gastric problems in the intestines.

It helps remove harmful materials in the body

Many herbs and plants contain phenols which have antioxidant properties. A chicory root is loaded with polyphenols that make it an excellent antioxidant. Since its root is a good antioxidant, it helps remove harmful materials in the body making the body clean and free from toxic materials.

Chicory has been used in Egypt as a medicine for many centuries, particularly to detoxify the liver according to studies. Chicory can help stop oxidative stress and injury to the liver according to studies conducted by the department of zoology in Egypt. When chicory roots are properly dried, they can treat symptoms of liver damage such as jaundice.

Chicory root contains inulin which helps lower the high levels of low lipoprotein cholesterol in the blood. As a result it helps lower high blood pressure hence promoting the health of your heart.

It helps in weight reduction

Chicory has oligo-fructose and inulin which can be added to your diet to help reduce weight. Inulin is a soluble fiber which can lower appetite for food. Inulin can make you feel as if you are full without raising your sugar levels and calories.

It enhances the immune system

It lowers stress and anxiety

Roots of chicory are also used to control sleep due its sedative aspects. It is a better alternative to sleeping pills because of those properties. Stress and anxiety are one of many causes of heart diseases, imbalance in hormones and untimely aging. By controlling stress and anxiety, you will be able to promote the health of your heart, have quality sleeping patterns and good balance of hormones.

It relieves you from constipation problems

Chicory root has high content of choline, beta-carotene, vitamin C and vitamin K. In addition to the mentioned micronutrients, chicory root is also rich in soluble fiber which can help prevent digestion problems including constipation. Since chicory has inulin, it helps promote the growth of good bacteria in your intestine which improves your digestion thus easing constipation problems.

Chicory root has anti-inflammatory properties which make it effective in treating inflammatory cells. Chicory root can help relieve pain associated with inflammatory conditions such as rheumatism and arthritis. The root of chicory can be used to reduce pain in muscles and joints and general body aches.

Chicory root is safe and many people tolerate it. However, it might cause allergic reactions in some people. If you are allergic to chicory or any of its products, avoid using it.

Do not use chicory when you are expectant because it can cause miscarriage. Breastfeeding mothers should not eat a lot of chicory roots because it can affect the baby. But research is still on to find out the link between breast milk and the baby.

When you are using chicory for removing gallstones, consult your doctor. This is because excess chicory can aggravate gallbladder issues.