What is Croup Cough?

Croup Cough is an infection commonly seen in young children below the age of 5 or 6, but it could also affect children of any age. Croup is characterized by a barky cough that arises due to swelling of the vocal cords of a child. Vocal cords tend to be the narrowest parts of airways, so if there is an infection causing swelling, it makes them narrower thus obstructing breathing.

Croup is not that dangerous as it was in the past. Today, various vaccines such as those for Haemophilus influenzae (Hib), measles, and diphtheria can adequately protect a child from dangerous forms of croup.

The condition becomes worse at night and it is common in times of fall and winter. It lasts for a period of about 5 to 6 days. Usually, symptoms of this condition will peak after the second or third night and at the beginning, there may be no warning signs whereby a child sits up in bed and suddenly has a barking cough.

At other times, it could begin just as a cold, but gradually, it escalates to become a croupy cough. 1

So, parents should watch over their children and be able to recognize when the condition is serious and when it’s not. Usually, croup cough is not a serious condition, though it is contagious. However, sometimes, there can be complications, which may result in more serious conditions.

Croup is almost always caused by a virus, though sometimes, there may be other causes and triggers. The common viruses responsible in causing croup are the human parainfluenza viruses (HPIVs). This is a characteristic group of four virus.

These viruses are airborne and tend to spread from the infected individual to a healthy individual through sneezing or coughing. They also spread through ‘hand to mouth activity’ often associated with young children, where a child picks the viruses from surfaces and puts them in her or his mouth.

Other viruses that trigger croup cough are such as:

Other triggers of the croup are such as allergies, inhaled irritants, and bacteria.

A telltale sign of croup is a barking cough that may be compared to the barking of a seal and it’s usually accompanied by a raspy voice. The child can make a high-pitched squeaking noise when they are breathing. A parent should watch out for the following symptoms and signs in a her or his child, which often manifest with a case of croup cough:

Some children may have symptoms that resemble those of cold and these could manifest for some days before the croup symptoms appear. The cold like symptoms are such as:

Children with this disease will breathe fast and at times, they need to sit up so that they breathe better. The symptoms tend to improve at day time and get worse during the night. Sometimes, kids who have an attack of croup, they will wake up during the night (at middle of night) and this may happen a couple of days.

But unless the disease is severe, you may notice that the child will be active and alert. The temperature also remains normal, but at times, it may be slightly higher. Croup cough does not last for long and it improves in about 2 to 5 days.

When Should You Seek Medical Help?

With proper home care, treatment of croup can be attained at home, however, it is advisable you consult a doctor if a child shows the following symptoms:

Some of these symptoms could indicate a life threatening condition other than croup cough, for example epiglottitis, which is an inflamed and swollen epiglottis.

A doctor may use a number of ways to diagnose croup cough, and they include:

In diagnosing croup, a doctor will take history of how the cough set in. The doctor may want to know more about the hoarse voice, stridor during inhalation, barky cough, and low- grade fever. And, while the child may look ill, he or she may not show signs of terror or panic.

There may be cases of sitting in a forward position, high fever, and excess drooling. If there has been recent exposure to some other child who had croup, this could help in confirming diagnosis. Remember that this disease is contagious. A doctor may conduct other diagnosis routines such as:

These are rare, however, a doctor may order a lab test, especially if he or she feels that there may be a secondary bacterial infection attacking the child, and which is superimposed or masking itself under the primary viral cause.

An imaging test like X-ray is able to show an elongated narrowing area of the trachea, which is what the doctors call steeple sign or wine bottle sign. This is a tapered upper trachea region. When the X-ray shows this finding, it can confirm a case of croup. 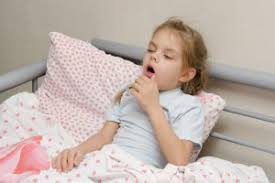 Yes, it is contagious. However, children having this disease tend to be more contagious in the first days of having fever or the illness. In households, the infection is likely to spread fast.

In case of children, teens, or adults in the household, they are likely to develop cough or sore throat, but may not have the characteristic signs and symptoms of croup such as the stridor and barky cough.

Croup spreads when airborne infectious droplets are coughed or sneezed by the infected child. If a healthy kid inhales the droplets, she or he may develop symptoms in about three days. Croup infection may also be spread through mucus being deposited on furniture, doors, toys, and other surfaces or objects.

The incubation period for croup is about 24 to 75 hours. This is the time it takes for a child to show symptoms.

Although a child having croup may have difficulties in breathing and a disturbing cough, home treatment can ease the symptoms. Here is what you need to do:

In the event that the symptoms don’t subside with home care, you may visit a doctor. The doctor will prescribe medications such as:

These medicines help in decreasing the swelling of airways. They are given in office of a doctor or in a hospital emergency room.